(just a note on the recent work by Jesús Zurita)

Words cover reality in mud, cloud it, camouflage it, obscure it and hinder it with their tautology. There is little mention of this power of words. Logically, it is not advisable. It is not advisable to know about its dishonest authority (as if every authority did not deploy some kind of tyrannical structure to falsify or impose their power). Hence the power of discourse over the visual—the word vanquishes the image due to its obviousness, with the obvious representing the shortest path to knowledge. Or rather, to the famous and longed for Vox Populi, which is a socially normalised knowledge, with no other value than its common sense, where common means of a community, not of truth or contrasted wisdom, neither the richest and therefore nor the most enriching for such reason.

Since forever, in all the time I have known him, two decades now, I believe that fleeing from this power is what the work of Jesús Zurita seems to do, for he makes it indecipherable, unclassifiable in words. As a writer (or doer of reviews) you can only border it, skirt it—perhaps—outline its silhouette, but never penetrate it or pierce it surgically. His work has always done that to me. It is an impregnable hotchpotch. From this position, Zurita’s work moves away from any effort that pretends to silence it with concepts, verbs, adjectives or any word that tries to describe it, being such a well-made experience as to its visuality that only there is where a dialogue is possible.

In his latest production, this elusive condition becomes increasingly sound because despite his formally recognisable linguistic resources, that is to say, what could be called his own stylistic language, meaning his red areas where the figure becomes petal, trunk, branch, root, skin, bulge, piece of meat or ankylosed rock anchored in the landscape, his linen or unbleached cotton as a demarcation of a symbolic desert territory, his use of a toxic green, almost too industrial to refer to a strange and enveloping vegetation as a biologised narrative element, sustantivised one might say, because the artist succeeds in not depicting them as ‘static plants’ but rather as a ‘kind of acting botany’; despite having acquired complete mastery over them all, Zurita is getting better and better at evading any label. He escapes the word.

However, sometimes obliquely, something allows us to approach his mysterious nonconformity zone, never a ‘comfort zone’. It becomes a zone of resistance. And in these last works we could say that this zone is the mental space of a flight. An escape. A displacing movement that flees, that tries to escape from this absurd present full of—perhaps overpopulated by—berserks in command.

A reality that Jesús avoids, postponing it. By diverting his static geography to a dramaturgy that falls in waterfall—at the possibility of remaining inert, he lets himself fall in precipitation, in free fall, in a suicidal leap into the void, in a fall that describes tears, sweat, a broken branch, coins thrown into the air, a sticky thing in the skin, a hotchpotch of leaves and petals that bend and leak as if it were a head of hair, a fur, a disguise. 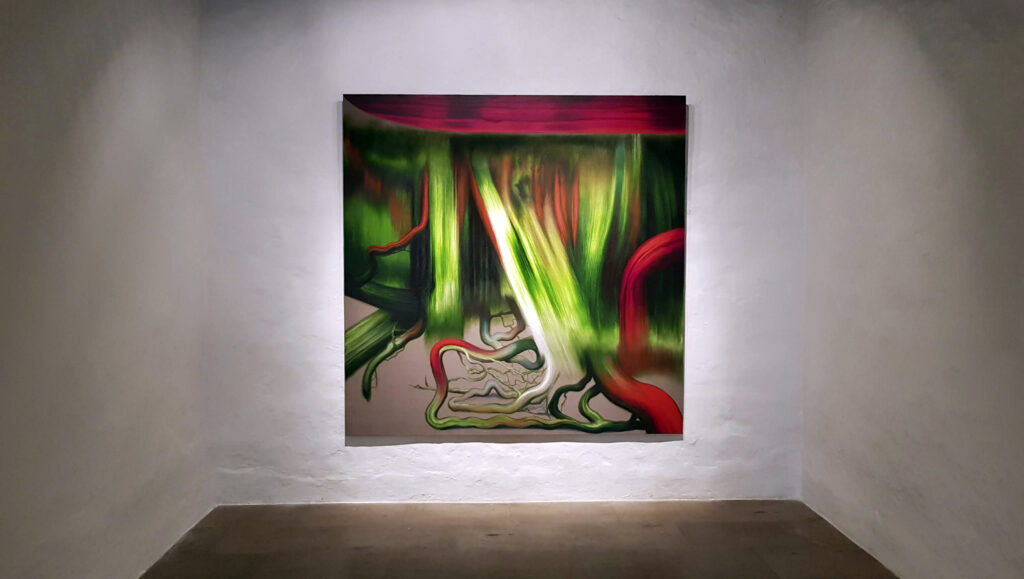 A disguise that is a political stance. Politics of differentiation: I am not you, I am not you, I will never be. Don’t demand me to do so. I can’t. I will never be able to. Nor do I want to be. Because I’m from somewhere else. I am something else, another kind of people. I’m one of those who doesn’t like easy things, fashions or the demands of political correctness, maybe I’m reactionary, but I’m not bowed to your vague formulations. I don’t surrender even to those who know me. They deceive themselves. They don’t know me. I choose to plug—definitively—the gap.

The landscape of this place in his mind helps him to leave behind the trap of those who use beauty to tempt our desire and subjugate us to dependence on beauty; perhaps because Zurita knows that beauty can be born from the tragic or from the terribly hideous, or it can be born poisoned, sick, twisted. A shift that simulates the dance of a samurai when crossing a forest, when his katana pierces a body, when his eyes observe through the veil woven by the shadow of the vertical fractals that his straw-hat draws.

An escape that—this time—does not involve cowardice, but protection, a place for resistance from which to condemn the absurd voice of the idiot who tricks us as berserks with chants of epicness and gallantry, of utopias and cheap arrogance, a resistance that adopts Art as territory-language-and place, and closes mouths with its undeniable and categorical presence.