My last refrain: Oh my body, make of me a man who always questions.

When we talk about the work of Diago (Juan Roberto Diago Durruthy, Havana, 1971), I always like to remember — maybe an occupational habit as an historian, and not by way of an anecdote, but rather as an important fact that affirms the intellectual genealogy that precedes him — that he is the grandson of one of the most important figures of Cuba’s 20th Century avant-garde movement. The legacy of his grandfather, Juan Roberto Diago Querol (Havana, 1920 – Madrid, 1955), together with the pre-eminence of Wifredo Lam, constitutes one of the most significant notes in the island’s pictorial modernism; home grown, not the one imported from Europe, in which Africa appeared only as a synthesis within formalistic expression. So the early Afro-descendant consciousness that awakened Diago’s imaginaries comes as no surprise, becoming political and ethno-racial agency that has taken him on a return transatlantic journey through which he emphatically explores the footprints of the African diaspora, revealing a Pan-Africanist drive for resistance that pierces the labyrinth of historical time and the violence of a silence imposed by the modern/colonial world system on the bodies and subjectivities of enslaved and racialised persons.

One of the ways discovered by Diago to weave such connections with his ancestors and the past is in the use of materials, usually raw canvas, recycled wood and metals, fragments of media that he fuses by means of montage and collage, making no attempt to disguise the traces left by this fusion in search of residual perfection, but rather leaving them in full view to metaphorise the scar, the keloids (the sign that represents the terror of the foreman’s whip on the backs of the black slaves who worked the plantations). In that mark lies the symbol of the violence of colonial extractivism on an entire continent, of the rupture inflicted on communities, families and ways of life, and knowledge that had to be reconstructed from broken memories to reconfigure a different, syncretic and hybrid knowledge, from the otherness of subaltern voices against the white, male, western, bourgeois, heteropatriarchal, christian subject. The artist stitches his fabrics and through that gesture seems to want to recompose those scattered memories. He uses this same procedure when soldering onto a metal surface, which translates back into a scar. Using these methods of assembly, his compositions are segmented into levels and geometric areas that inevitably penetrate the very history of modern art and abstraction to stress the different discursive axes that overlap in his works in the manner of a palimpsest. It is impossible when contemplating Diago’s works not to think about the process of whitening or bleaching carried out by European modernisms on material cultures and objects whose anthropological function was displaced by the exercise of an aesthetic synthesis of European isms that occurred in the first half of the century. 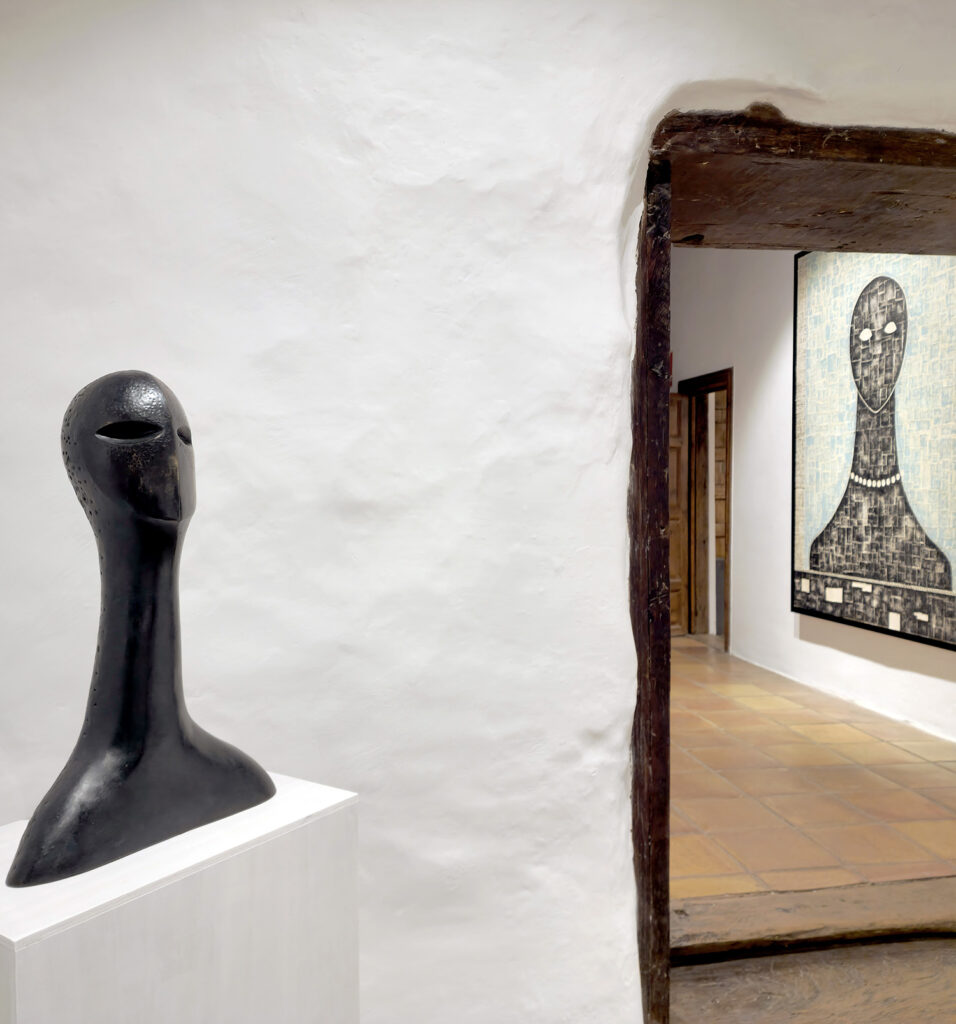 Diago’s aesthetic inquiry constantly swings between those false dualisms that the modern episteme tried to institute between “high-low” cultures, “abstraction-figuration”, “tradition-modernity”. For this artist, building the image becomes a tool that questions any type of canon seeking to impose itself on the free will of his exploration in the plural imaginaries that feed into his art. Thus, the very creation of his canvas medium plays with the illusory appearance of fragment using small squares of fabric that are joined into colour planes to set up the image. The smallest unit of the digital image articulating the pixel is cut here in a scrap or patch, reminiscent of those patchwork quilts sewn by our grandmothers in the evenings, when homes were a place of calm after the domestic maelstrom of the day. Thus, high and low technologies are transformed into a simulation game in Roberto Diago’s work, such as when he builds his photographic light boxes from old, recycled wood pallets.

A symbolic effigy embodies that witness of time in Diago’s work, that character that could even be assumed sometimes as a sort of self-representation of the artist and with whom the artist identifies, as he has stated in various interviews. It is that schematic black silhouette, where the almond-shaped eyes like cowries or snail shells are related to Eleguá (the Orisha that opens the way in the belief system known as Regla de Osha-Ifá). This figure observes us from the depth of these cavities bored into the face like eye sockets; but it does not speak. it has historically been deprived of a voice that was sequestered along with the richness of its original cultures. Black voices that were marginalised, excluded, silenced, and expelled from the order of discourse. For the first time in this exhibition, Diago brings that recognisable sign of his canvases to a three-dimensional sculptural concept and also makes a foray into the use of bronze as a material. Once again his use of artistic material forces us to think of another sequestration, that of the Benin Bronzes, which are still exhibited in Western museums as a testimony to colonialist usurpation. 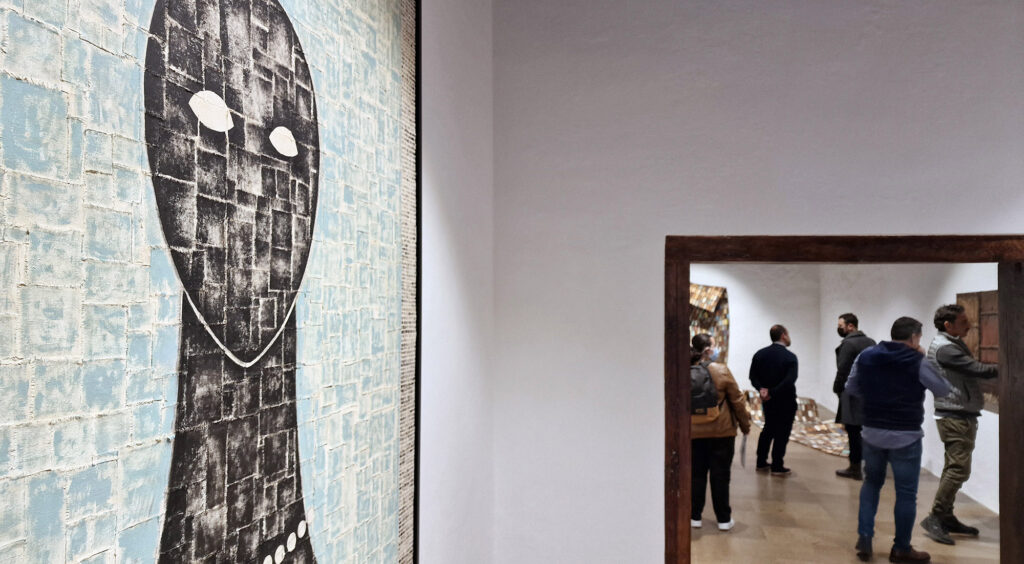 However, it is perhaps that latent voice, which remains indomitable in the memory of the African diaspora that is replicated in each of the pieces and fragments of wood in that great sculpture-tongue, which resembles a mat like the ones often found in the sacred rooms where the priests of Ifá or Babalawos carry out the divinatory process of Ifá. In that place, and on a blanket of fibre, the messages of Orula, Orisha of knowledge, are interpreted. There the ancestors and the dead are invoked, and the Yoruba language resonates once more with all its decolonial power. It is in the modern daily practice of traditions of African descent that the black body ceases to be a silent witness to colonial genocide; his voice emerges as a cry that pierces the deaf labyrinth of historical time to declare the strength of Afro-descendant political agencies that neither slavery nor racism have been able to subjugate.

Visit this exhibition in