In October 1973 a memorable exhibition was opened at Sala Conca, in La Laguna. Its creator, Ernesto Valcárcel Manescau, born in Tenerife in 1951 and an architecture student at the Escuela Técnica Superior de Arquitectura (Higher Technical School of Architecture) of the Canary Islands, had already presented his first works in several collective exhibitions and in a solo exhibition held the previous year at the Casa de Colón in Las Palmas de Gran Canaria under the title STUVW. However, between both exhibitions, Valcárcel’s work would undergo a deep, ambitious transformation, which within a few months would be rebuilt upon its first babbles with a powerful, disturbing plastic language. STUVW was, according to its author, an exercise of “summary and conclusions of the abstract period which began in 1967“, a condensed version of his self-taught run-up that appeared to be driven by the imperative search of a principle, an own attitude and, ultimately, an artistic identity. Materia, rito y alquimia [Matter, Rite and Alchemy], the exhibition at Sala Conca, made the first sound steps of this singular creator reverberate in the plastic scene of the Islands in the 1970s.

Materia, rito y alquimia encompassed the results of the transformation undergone in Valcárcel’s work in barely a year of radical experimentation with volumes and relieves on the canvas, as well as with the materials he would incorporate into his work: sewn fabrics, glues, asphalt…, and it was inspired by the consequences of his reflections on the work of art and the exhibition act as an integral part thereof. This symbiosis between work and attitude turned Materia, rito y alquimia into a sort of aesthetic manifesto, a non passive but belligerent positioning against the artistic event insofar as its introductory text read: “the exhibition-event, which will attract a disconcerted, sometimes bewildered audience, but who participates inevitably with their bewilderment, indignation or mockery.” Materia, rito y alquimia was made up of pieces of glued and asphalt-coated fabrics, with which the artist sought “to create a spectacle defined by the strong presence of objects that, piled up pell-mell, would fill and fully take up a walk-in area.”

The willingness to create installations that has emboldened Ernesto Valcárcel’s work since his beginnings is to be materialised in an excessive, provocative work: he would hang from the walls canvases that are fleshed out to the point of tightening, with tense adiposities, viscera or textures, and he would encircle them with ‘objects’ that seem to break off from the paintings, poured into the outwardness at which they aim (sculptural secretions which are among the most enigmatic in contemporary sculpture in the Islands), objects with which he would invade the ‘walk-in area’, creating a sphere of organic resonances, a surrounding bosom that welcomes and to a certain extent ‘digests’ the audience. The stains and their sudden corporeality in this first stage of his three-dimensional work refer to the latent magisterium of Pedro González and Manolo Millares, who had died the year before. Valcárcel follows suit of his use and manufacture of sewn, painted fabrics in order to create volumes and tensions in their canvases.

Matería, rito y alquimia—of which the largest piece and perhaps the only sculptural object conserved is now exhibited together with four of the gouaches exhibited then—opens the foundational cycle of Ernesto Valcárcel’s work. This sequence of his work, which is now being paid tribute and revisited in the exhibition AB INITIO, develops and evolves during the decade of the 1970s with two equally relevant exhibitions as landmarks: Los espacios inaccesibles [The Inaccessible Spaces] (1974, Sala Conca II, Las Palmas de Gran Canaria) and Secuencias de un ámbito onírico [Sequences of an Oneiric Environment] (1978, Galería Balos, Las Palmas de Gran Canaria and Sala Conca, La Laguna). Through them, Valcárcel would deploy the features that will make his plastic inquiries over the following decades until now captivating, when his fascinating experience reaches the half-century mark and gathers an essential, unique work that enriches, as indeed very few do, the story of contemporary art in the Canary Islands.

The process that encompasses the three exhibitions would carry him from an initial abstract register that would give rise to the first three-dimensional works, as can be derived from the series of small drawings in tune with González’s Icerses that the artist did during the first months of 1973 before undertaking volumes, to the figurative outcrops of Secuencias de un ámbito onírico, in which the symbolic and the fantastic nurture his works. This transit would be enriched by the curiosities and interests of a young Valcárcel, who would be tying other ‘secretions’ of his spirit in to his project, such as the ludic objects (puzzles and draftboards) or the illustrated manuscripts. The so-called Manuscritos Uacsenamianos [‘Uacsenamian’ Manuscripts], “a logbook that is inherent in my activity and experience as a plastic artist“, as defined by its author on numerous occasions, is an open codex which would become, over time, the document that integrates and enlightens all his work, as well as his most intricate and extensive heteronym. Valcárcel would show for the first time some of its pages in Los espacios inaccesibles, while continuing with his three-dimensional works in which, even though he follows the construction patterns of the works in Matería, rito y alquimia, a gestational process is already being hinted.

Two works belonging to Los espacios inaccesibles that are very representative of these changes are exhibited in AB INITIO. The first one is monochrome, with shades of amber, an apparently abstract composition with packed volumes and linear tensions,yet urged by an archaic impulse, a fragmented frieze where the shapeless offal of the archaeological remains still lets us catch a glimpse of some interpretable parts: a twisted torso, an emasculated member… The second one is carnal, with shades of dark-brown, and conveys the drama of sackcloths with its own language, even though the homunculi shapes have replaced the sociological and the anthropological with the inscrutable and the alchemical.

Alchemy—its hermeneutic activity, its creating strategy and its literature—would influence Valcárcel’s entire artistic activity, with special emphasis during the last stage of his three-dimensional period. A few years later, in El jardín caligráfico (The Calligraphic Garden), he would clarify that despite his scepticism about occultism and paranormal phenomena, as well as his theological agnosticism, he recognised that alchemic literature had always exerted an unequivocal, stimulating effect on him that only poetry gave him.

Four years would elapse between Los espacios inaccesibles and Secuencias de un ámbito onírico. The four homunculi that emerge from the muddy basin that occupies the lower part of the aforementioned painting would become disturbing realities in 1978. Doll heads and bodies or parts thereof are incorporated into his works as ritual shadows. At this moment painting and writing interact to such an extent that he invents and documents a ‘Uacsenamian’ mythology in the strict sense, which he calls Mitología Nintra [Nintra Mythology], structured and based on elements and characters compiled in La mapunda azul [The Blue Mapunda], a book that contains tales, projects and descriptions of this mythology. Again, mapundas would be the object of attention and interpretation that same year in a series of ten monoprints entitled Estampas, claves y moradores del jardín de las mapundas [Pictures, Clues and Inhabitants of the Mapundas Garden]. 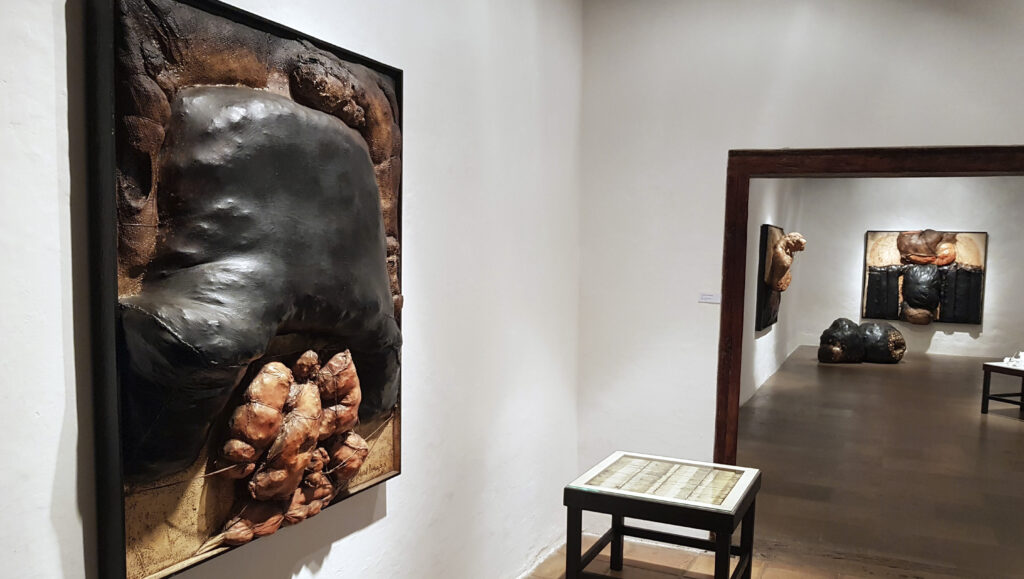 AB INITIO provides us with a privileged occasion to discover the traits and nature of this fabulous being, in addition to confronting us with a work which, as The Nightmare by Füssli, may be spine-chilling. Parto de una mapunda hipotrópica voraz [A Ravenous Hypotropical Mapunda in Labour], one of the last three-dimensional paintings by Valcárcel which is now exhibited for the first time, represents the terrible, private moment when this mythical entity gives birth to its homunculus. In the catalogue for the 2008 exhibition Naturalezas disecadas [Stuffed Natures], when the whereabouts of this work were still unknown, Valcárcel, who regretted not being able to include it in the core section of that exhibition, recalls that “Parto de una mapunda hipotrópica voraz… was a rare piece which had never been exhibited publicly… which I created in the late 1970s on commission by a collector from Tenerife, after whose sudden death it became part of another local private collection.“

Ernesto Valcárcel would also present works resembling puzzles and draftboards in the cycle’s last exhibition, which gives us strong clues as to his Duchampian lineage. They are both games that enable the movement of their pieces, the former by aesthetic intuition and the latter by construction logic. The two draftboards exhibited in AB INITIO perhaps represent the extreme solutions between which the series ranged—it is surprising to see the baroque impetus that led him to make the pieces in one of them with doll arms, whose hands hold different symbolic motifs and revealing inscriptions, in contrast with the more sensitive, oriental emptiness of the other one, arranged only by soft chromatic values.

The puzzles, on the other hand, are cut-out and re-assemblable drawings, with vibrant colours and strokes that are close to comic, with collage elements and texts integrated into them. These are works in the realm of the most expressionist pop-art, namely of Robert Rauschenberg whose work, together with that of many others, he was able to discover in a 1969 exhibition on this movement that he had the opportunity to visit during his few months’ stay in London. The puzzles would be exhibited for the first time in Secuencias de un ámbito onírico, as previously noted, and for the second and last time in L’age de la colle, a 1989 exhibition at Estudio Artizar that brought together four artists who used collage in their works: Ernesto Valcárcel, Candido Camacho, José Luis Medina Mesa and Fernando Álamo. The unusual thing is that the puzzles were exhibited and sold “wrapped in rudimentary, small brown-paper packages sealed with adhesive tape (…) hidden from public curiosity and expectation“, quoting the artist’s own words in the catalogue for the exhibition El jardín caligráfico.

Specifically for El jardín caligráfico, held in 2003, Valcárcel would resolve to edit the puzzles in a collector’s edition, but not at their real size but rather over-dimensioned, limiting their handling and their ludic functionality in order to enhance plasticity and presence. Two copies of that edition reminisce them by way of end of the tour to which AB INITIO serves as an invitation.

From 1979, the second and last date on which Ernesto Valcárcel signs Parto de una mapunda…, the three-dimensional works would give way to other essays that would crystallise in a new abstract episode. In his next 1983 exhibition entitled La mitología Nintra, the few volumetric pieces exhibited would once again be objects, now set in a povera sobriety that accompanies the fragmentation and randomness of his pictorial experience, which in the following years would end up becoming an investigative method and even a new feature of his artistic identity. As for the three-dimensional work, the asphalt-coated fabric sculptures, the games… they would drift away encapsulated in their time, still they have remained significant in the adventure of their creation as one of the truly convincing reasons to believe in it.

We would like to thank Ernesto Valcárcel for his selfless support to this exhibition that recalls his work in an obscurely transitional yet brightly discovering decade, providing us with unpublished material and works of his collection that he keeps since then. We would also like to thank Gonzalo Díaz or Sala Conca, for the lending of its Valcárcel collection and for having contributed to that desperate adventure.

Last, we would like to thank all those who have participated in the organisation and setting up of AB INITIO.